Hibbing Fabricators recently attended the HAI Helicopter Exposition in Las Vegas. The goal was to network and represent our capabilites of manufacturing of sheet metal and machined parts to the aerospace industry in general but also to the Helicopter manufacturers worldwide. Some of the manufacturers in attendance were: AIRBUS, BELL, ENSTROM, ERICKSON, COLUMBIA, ROBINSON, UTC and many other North American as well as international companies. 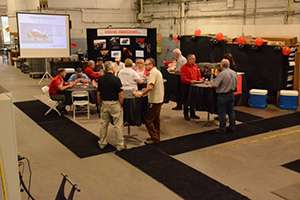 Hibbing Fabricators celebrated its 30th anniversary by inviting family, friends, customers and business partners to tour our facility and meet employees throughout the afternoon luncheon.  Since 1985, HFI has been supplying quality parts and services to customers from coast to coast as well as the five state area.